One does not have to be a faithful Christian to enjoy a good Christmas market, and the Swiss markets in Zürich during the Advent period (22 November – 23 December) are very good indeed. Truly, those markets are useful and delightful for non-Christians just as well. As a market, it is a commercial event at its core. But much beyond its commercial function, the Christmas market has the flare of a festive fair, and this is well felt in Zürich.

Remarkably, the Christmas markets of Zurich do not have the appearance and feel of an over-commercialised event. A careful observer may find signs of event marketing and brand marketing, but they are woven cleverly and tastefully into the market happening so it should not disturb the visitors. Big brand names are not omnipresent or dominating the markets. Instead, stalls seem to be inhabited mostly by small and independent local traders, and much of the merchandise is made by handicraft. The magic of this organisation is in giving the sense of older-times retailing. These characteristics may signify, more broadly, a distinction between European and American approaches to commerce and marketing. Nevertheless, the Zurich Christmas markets seem to exhibit elements of a well-thought marketing design, yet without making them imposing or too apparent to celebrating visitors-shoppers.

Just to remove any doubt before continuing: These markets involve not only merchandise — food and drinks play a major role in them. More will be said about eating and drinking at a Christmas market later in the post.

Several Christmas markets operated this year (2018) in Zurich, the three major ones were in the main railway station (Hauptbahnhof); in front of the Opera House near the lake; and in the Niederdorf Quarter in the Old Town of Zurich (on the north bank of the Limmat river).

The Christkindlimarkt in the large hall of the Hauptbahnhof (i.e., it is located indoors) is the most immediately accessible to anyone arriving to Zurich by train. But furthermore the station is a major hub of travel and shopping for anyone passing through (note: the station lays over a large underground shopping centre). It is the central market of the city with 150 stalls. The Christmas market in the station is therefore said to be the most busy one in the city, and it can feel over-crowded at times. 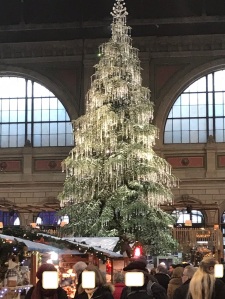 through it with stalls on both sides, and some passes connecting between them. In the middle of the market features the main attraction: a 15-metre-high sparkling Christmas tree with glass decorations, courtesy of Swarovski. The tree is surrounded at its base by displays of glassware jewelleries, figurines and other decorations by the Swarovski retail brand, with a little hut-shop next to the tree (a Swarovski store is situated across the street from the railway station). The tree makes a very impressive attraction, nevertheless, and lures many visitors circling around it. Overall, the market looks and sounds cheerful and busy, and while the Swarovski-branded tree acts as a market’s anchor, it does not seem to distract visitors-shoppers from attending the many stalls in the Christkindlimarkt with their various gift-opportunity offerings and food delights.

A greater festivity takes place, nonetheless, at the Christmas village (‘Wienachstdorf’) in the large square in front of the Opera House (Sechselautenplatz) just next to the Zurich Lake promenade. This Christmas market-village entails around 100 stalls, arranged in free-form, curve-shaped areas. Not least, it seems to offer the best opportunities for eating and drinking in between looking for merchandise. A large place is dedicated in the centre of the village for sitting at long tables to eat some of the delicacies like Swiss raclette or a French crêpe. Since this market is open-air, and it can be freezing cold, a most popular hot drink at this time of year is Glühwein (mulled wine) — many people can 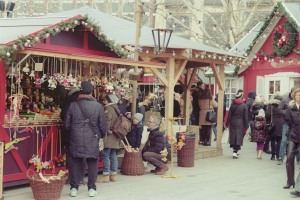 be seen walking and warming up with cups of Glühwein. There are, however, some more protected areas to stay, eat or drink, particularly two indoors halls that resemble pubs in atmosphere. The market is plentiful with merchandise at the stalls, so much it is impossible to cover here its variety.  Most products can fit appropriately as gifts for family and friends, but they also suit shoppers wishing to spoil themselves for Christmas. One may find there winter accessories, decorations and toys of all sorts, woodcraft, and much more.

Two main attractions are especially noteworthy; each is of a different type, and either is hosted by an Alpine mountain resort site. The major leisure attraction is an ice skating rink, hosted by Arosa mountain resort (neighbouring Lenzerheide in the Graubünden Canton). Little children are welcome to join skating with the aid of ‘penguins’. Traditional Christmas songs (as back in time as from the 1940s) play in the background to complete the nice entertaining experience. A culinary attraction on site of the Christmas village is the Fondue Chalet hosted by Klosters, the Klosters Stübli (Klosters is a resort village neighbouring the more famed town of Davos). Inside the chalet, diners are seated at long wooden tables on benches with woolen covers, giving the place the atmosphere of a public dining house. Having a fine cheese fondue with a glass of cider makes a wonderful meal. True, the two resort sites make a promotion for themselves ahead of the winter vacation & skiing season, but in view of the pleasant benefits they provide to the visitors of the Zurich Christmas market, such a branded initiative appears legitimate and welcome. They fit well as event marketing attractions in the Wienachstdorf that add to the whole festive atmosphere, like one big street party.

The third key Christmas market is in the Niederdorf Quarter of the Old Town. It is centred at Niederdorfstrasse, but it has ‘satellite’ extensions along the streets, starting from the large cathedral of Gross Münster. The headline advantage of this market is the relaxing atmosphere that the Old Town architecture provides. It is relatively smaller as well as calmer than the two previous markets described. 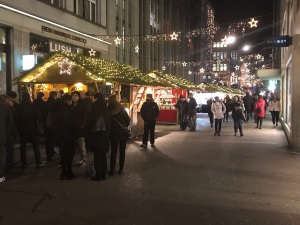 nd Globus department stores, and continuing in front of the latter. It adds light and buzz to that area that is not available in other times of the year. Another Christmas market happening takes place not far from there, at Werdmühleplatz, next to the main shopping and business Bahnhofstrasse. There beside the stalls stands a large Singing Christmas Tree; in the evenings different choirs from the Zurich district stand on elevations around the tree and sing Christmas songs in various languages to the pleasure of a pedestrian audience. This gives a special celebrating atmosphere to the small market.

To complete the picture, add to the Christmas markets the sights of Christmas lights in different decorative forms and colours, hanging above streets and on the facades of buildings, especially those housing large stores, banks, and other prominent businesses. The Christmas lights will follow shoppers most of the way moving from one market to the other. A special tram for children runs between sites in the city in a round tour starting nearby the Wienachstdorf; the children are hosted by Christmas angles (Christkindli) on their trip, sponsored by Jelmoli department store. 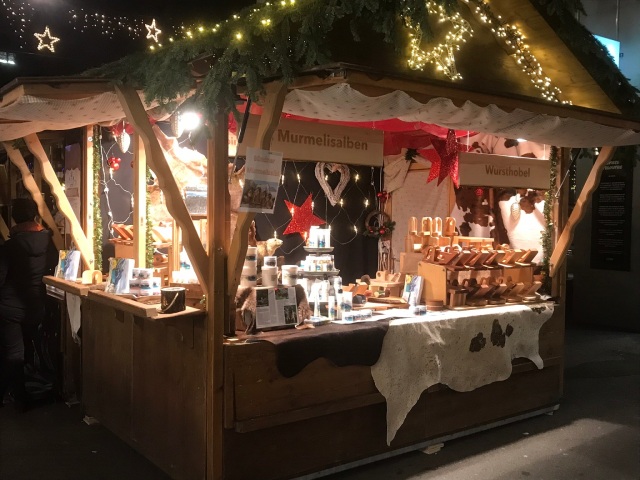 It must be emphasised that stalls selling food and drinks are available for visitors-shoppers in each of the Christmas markets, including serving the Glühwein, a necessity when temperatures drop to zero degrees Celsius. Similar food delicacies may be found in most of the markets (e.g., raclette, sausages, crêpes, Berliner, mini mousses), yet the market in front of the Opera seems to be the culinary centre with a greater variety of foods (e.g., including also Asian cuisine). Lines may be found in front of every food stall at the Wienachstdorf, and the tables in the village centre are almost always fully occupied.

Notwithstanding the markets in Zurich, an experience of an even greater Christmas market is awaiting those willing to go farther along the Lake of Zurich (less than an hour journey by train) to Rapperswil-Jona, its lakeshore promenade and the Old Town. The Christkindlimärt spreads over the large place of the promenade and extends into the 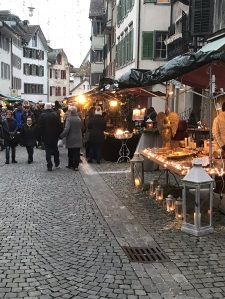 streets of the Old Town going up to the castle. The market inhabits over 200 stalls of nearly anything one can ask for in gift merchandise for the holidays, foods and drinks. Notably, more handcrafted artifacts appear to be available in this market than in the city. Overall, there seems to be much greater variety of products in this market, if you include stalls on the promenade and within the town. Additionally, one may find there food produce to buy for home (e.g., varieties of cheese, salami). Musical performances are playing from a stage in the promenade to make the celebration merrier. As a note aside, no conspicuous brand marketing could be readily traced in this event, except perhaps for the event marketing of the whole market. In summary, the Christkindlimärt of Rapperswil-Jona offers a special and rich experience that feels more free, like a holiday in the countryside, to anyone willing to make the modest distance.

The Christmas markets of Zurich, as described above, are well organised and designed to create festive events — the markets are both commercial events and celebrating events for the seasonal holidays. There is a flourishing shopping activity that visitors are engaged in, but it is enveloped with leisure, culinary and entertainment activities and experiences. Visitors walking through the markets can mix between all these possibilities to create each his or her favourable experience. The style of these markets, not unexpectedly, is orientated more towards the traditional marketing and retailing rather than modern design. But it has to be well planned in our days to sustain those earlier characteristics. In that sense, the markets appear to manifest good practices of event marketing. The city of Zurich can be complimented for creating attractive festive markets for residents as well as tourists.

One thought on “Festivity in Christmas Markets”

A Spread of Autumn Leaves

Digital Changes Coming Ahead for Marketers and Consumers

Differences and Conflicts Between Metrics of Response to Customer Service Calls 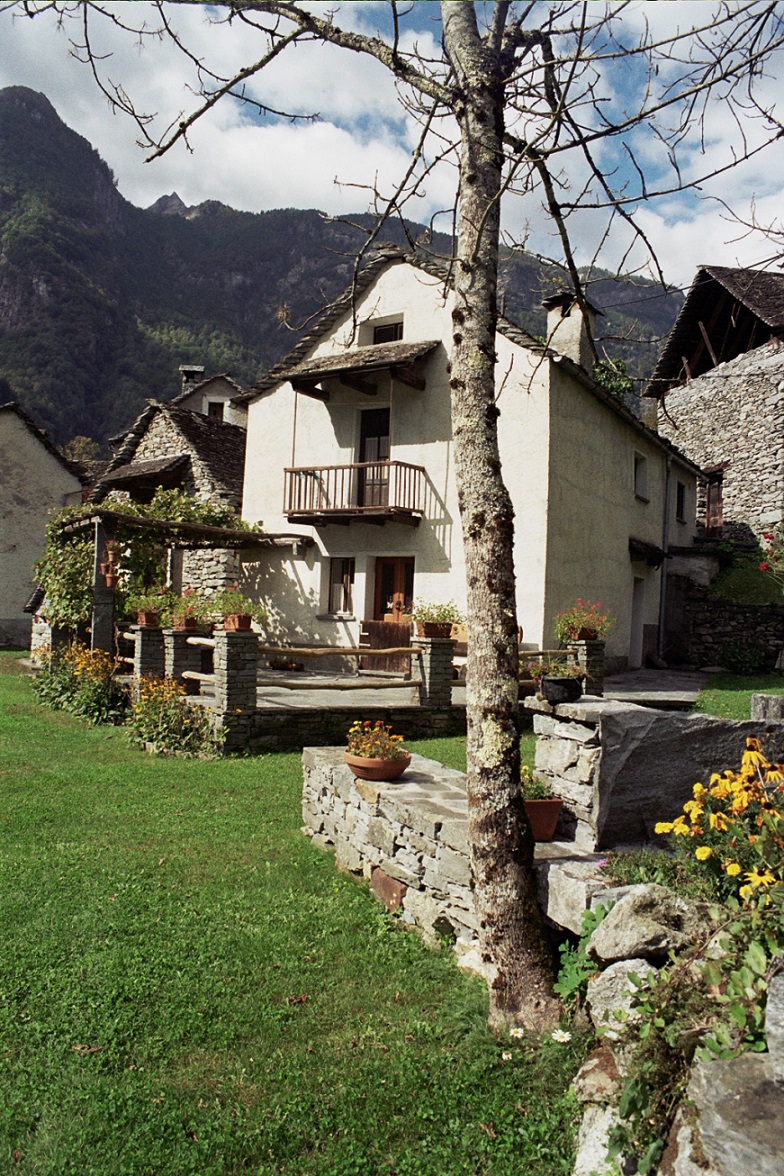